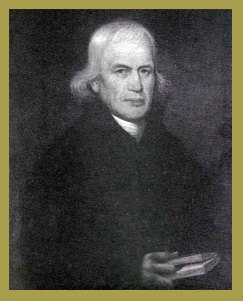 Bishop Francis Asbury - “The Prophet of the Long Road”

Bishop Francis Asbury and Reverend Henry Bradford were fellow laborers in the Methodist Church as well as good friends. Bishop Asbury often visited in the Bradford home as he traveled through North Carolina. Certainly the friendship and ministry of Bishop Asbury was a great influence on the lives of the Bradford children. On one occasion Bishop Asbury wrote in his journal that he called for "dear Henry Bradford and wife " to join him at James Hunters.

A dreary ride of 30 miles without food for man or beast, brought us to Joseph Pippin's; here we were kindly entertained: Our friend Pippin hath been settled in the Connecta Swamps for twenty years : he hath six children, and about fifty slaves, and never has had a death in his family.  Mercy and miracle! May they praise the Lord!

Friday 13. At Toole's meeting-house, near Tarboro, brother Whatcoat addressed the congregation upon Zechariah ix., 12. My choice was Isaiah 1, 9. I spoke with great heat and rapidity about half an hour; my text was well chosen, if the comment was not well executed. We lodged at Mr. Toole's.

Saturday, 14.  Fifteen miles to Prospect Chapel - open to all societies.  Brother Whatcoat gave a short discourse upon justification by faith.  My subject was: The love of God and the love of the world contrasted with, and subversive of, each other: according to the degrees, so the effects and fruits of these opposing systems.

Having fourteen miles to Henry Bradford's (Halifax County), we had no time to dine.  We took to horse, and came in with the shadows of evening.  This morning we breakfasted at seven o'clock, and we now supped at seven - hard preaching and hard riding occupied the intermediate hours.

We have passed rapidly through Edgecombe into Halifax county.  O, the awful state of religion in this circuit!

Sabbath Day, 15.  At Bradford's meeting house, near Fishing Creek, my portion of the word was from Psalm 1, 2, 3.  I discovered some solemnity and a few tears.  Brother Whatcoat preached on John III, 17.  We rested this Sabbath.  We have ridden one hundred and twenty miles in a few days of the past week.

Monday 16.  We were under the neccessity of moving to Northampton.  It was very warm: we started, and crossed the Roanoke river at Pollock's ferry, and arrived at Richard Whitaker's - twenty miles.  I was taken very ill with a bilious affection.

Page 198: dined with Mr. Isaac Guion, and lodged with Mr. John Bellamy. We rejoiced in hope that Tarboro and Halifax will yet hear and receive the Gospel: Henry Bradford hath been preaching in the Iauer, and brother Bellamy in the former with some success. We attended at Prospect Hill. It was an exceedingly cold day, as need be. I only exhorted after Nicholas Snethen had described the new creature in Christ Jesus. We fed our horses, and ourselves ate in the woods, and then went forward to Henry Bradford's. My soul is continually stayed upon and comforted in God: but it is not needful to tell all my outward difficulties and inward sufferings: heaven will make up for all- and then we

shall know all we wish and wait to know.

Sabbath, 7. Was a very cold and cloudy day: we held our meeting in the dwelling house, and filled both

Monday, 8. We crossed Roanoke at Pollock's ferry, and came to Richard Whitaker's. We had no appointment at Rehoboth, but on Tuesday we called a meeting: Nicholas Snethen spoke on Philippians II, 5; I followed from Matthew v, 8. At Anthony Moore's (Northampton County), we called a meeting, where each of us delivered our testimony, and then rode on to Mr. People's here the presiding elder made an appointment, by including it with others, but of this there was no notice given, except by our coming into the neighbourhood the evening before: we would not neglect our duty, but at Malone's we faithfully, according to the grace and time given, discharged our task and rode on.

February 25. It rained and hailed ; and through the night snowed heavily, and continued to fall on us after we set out until we came to Prospect Hill. We fed, and went on to Henry Bradford's, twenty-five miles. The snow in places was from eight to twelve inches deep ; and as my horse was newly shod he clogged, and kept me in continual fear. On Saturday I preached at our host's from 2 Pet. i. 4.

Sabbath Day 27. We came to Halifax. The rich had the gospel preached to them by N. Snethen. from 2 Cor.5. 15-17; I had to speak a little, and then baptized the children. The respectable sisterhood were very attentive; in short, a more decent, well-bred congregation need not be. We dined at D. Fisher's, who treated us in a most serious and friendly manner. By guess, I should say there were forty families in Halifax. We were impressed, as if by magic, that the river would rise rapidly; so we crossed at four o'clock, and rode twenty miles, to Seth Peeble's, whom we called from his downy bed to take in poor benighted travelers.

Page 270: and keenly felt by an old man o£ seventy, deeply wounded in the limbs, breast, and lungs.

Sabbtath, 5. I spoke to a gathering of serious people at Edward Hall's large dining room: the speaker was led to some awful truths. I am occupied in reading, writing, and patching and propping up the old clay house as well as I may: God be gracious to us still!

Monday, 6. We breakfasted with Mrs. Austin. O! the look expressive of the workings of her soul she gave, when in the trying hour she said, " Pray for me!" Shall a Methodist conference assemble, a society be gathered, and a chapel be built in Tarboro? Dined with Exum Lewis and wife: this favoured pair have been renewed and quickencd. The house of their father was amongst the first in former days to receive the Methodists, and the children now open their house, and hearts, and hands to them: may the Lord convert, and own, and bless their children's children to the latest generations! Amen' amen!

Came to James Hunter's at Fishing Creek-a cold ride. I sent for dear Henry Bradford and his wife, and we renewed our covenant with God. Tuesday, to Halifax; mother Long would by no means take a nay: honourable woman! I gave an evening lecture to some serious souls, and John Wesley Bond exhorted after me with energy.