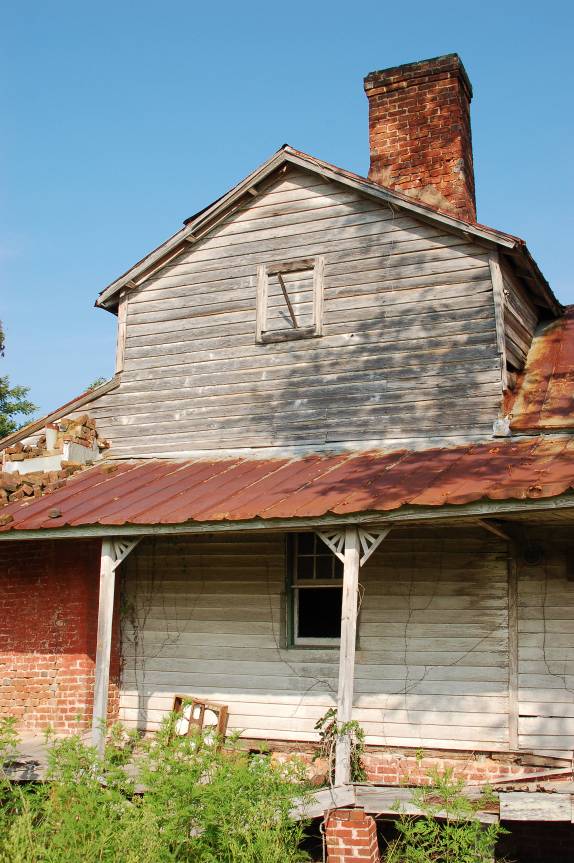 At the request of Peggy Jo Braswell and Jeff Dickens of the Historical Halifax Restoration Association, Inc., I made a cursory site visit to the property on July 31, 2008. Peggy Jo and Jeff participated in this site visit. The purpose of the visit was to provide observations on the architectural evolution of this building. It is my understanding that the Historical Association is considering relocating and restoring this house in or surrounding the town of Halifax. Due to our time constraints along with the amount of vegetation that covered the house, this report is limited. Further study of the architectural evolution of the building and its condition is strongly recommended. 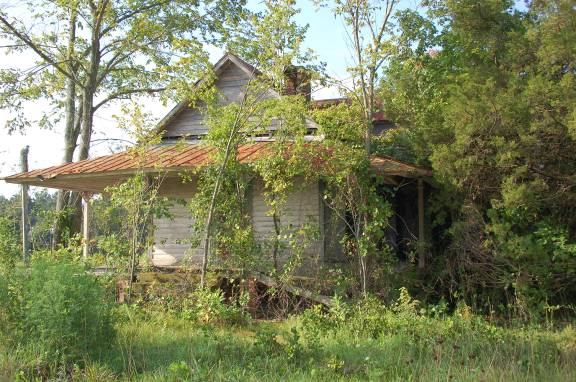 Local tradition suggests that this house was constructed in the mid-18th century as a 1 1/2-story residence.  There is little question that the house has undergone several major alterations since construction.  Even with these later alterations, a substantial amount of early building fabric remains. 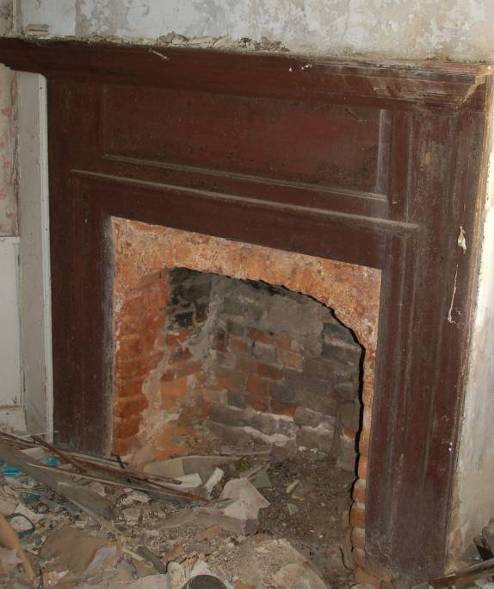 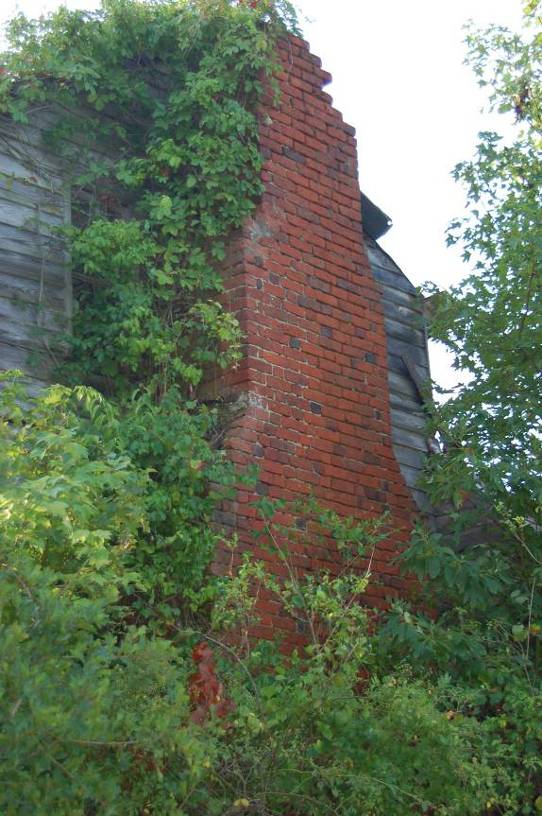 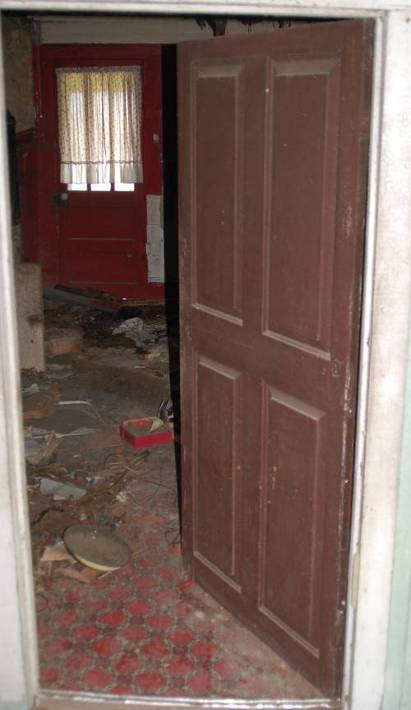 Architectural evidence supports the theory that the house was constructed as a 1 1/2-story dwelling.  Empty mortise holes in the 2nd floor flooring along the north and south sides indicate the location of knee walls that would have supported the lower end of a gable roof. 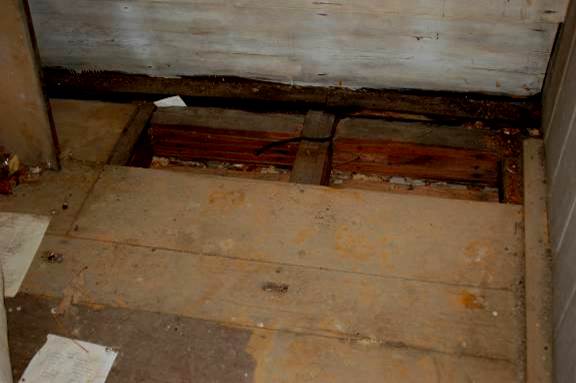 Additional evidence of a 1st period gable roof can be seen on the 1st floor plates (not photographed).  Several large fully hand-wrought nails can be seen on the plate where the gable rafters were once attached.  The rafters were removed when the roof was altered to a gambrel roof.  Prior to the change to a gambrel roof, the house appears to have undergone some alterations likely during the 18th century.  Without crawling under the house I am uncertain if the house started out as a one-room plan, hall chamber, or perhaps three rooms on the first floor.   The plan is certainly interesting and deserves close study. The mantles and much of the trim in the east and west rooms of the main block along with the front (north) portion appear to date from the same or similar time period. 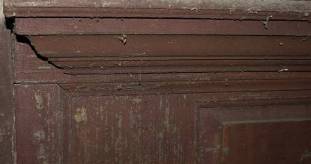 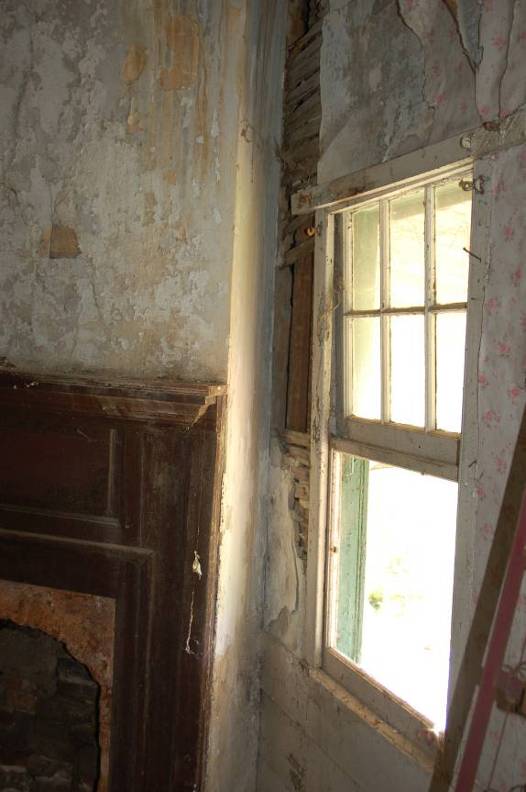 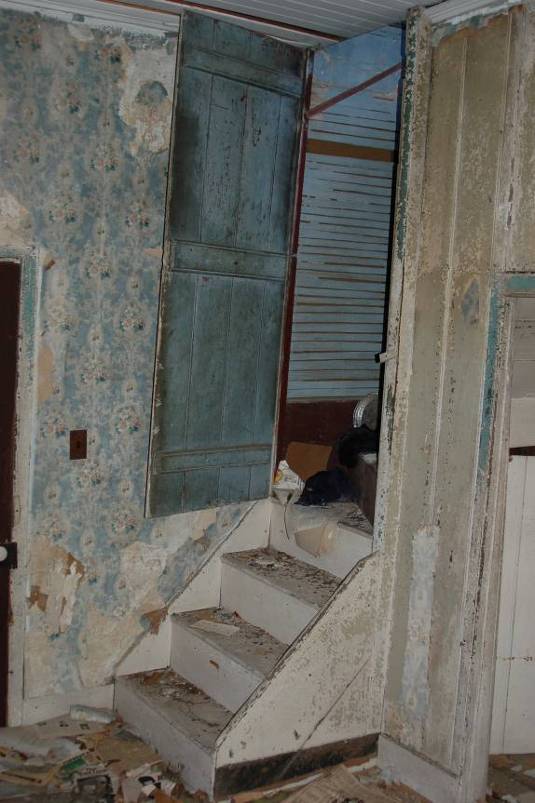 The 1st period ceiling joists were exposed in both rooms of the main portion of the house.  The ceiling joists were fully beaded with a typical 18th century style molded bead.  However, there is an interesting difference between the ceiling in the east and west rooms.  The west room (containing the enclosed stair) contains a beaded edge on the bottom of the 2nd floor flooring in addition to the beaded ceiling joists.  The east room ceiling only has beaded joists. 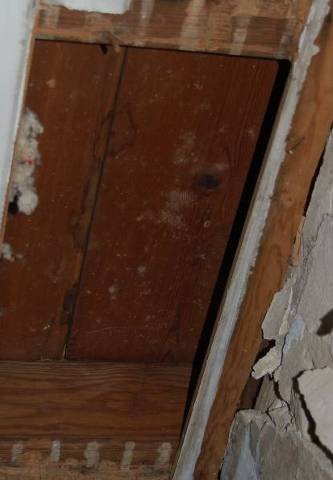 Another interesting observation is the early paint that survives on the beaded sheathing.  This paint appears to pre-date the installation of the plaster ceiling. 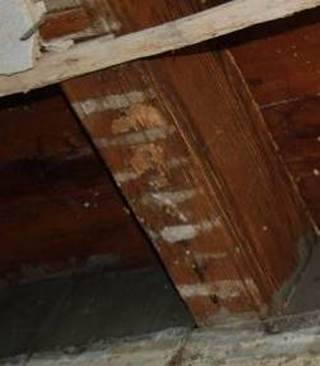 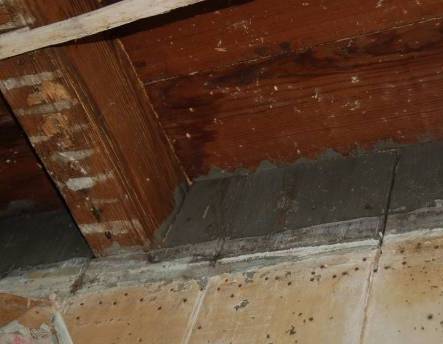 The date of the gambrel roof change is uncertain.  From the attic space above the one-story north wing there is a mix of hand-wrought and cut nails on the outside of the lower section of the gambrel roof framing.  At first glance, the gambrel roof appears to date to the early 19th century.  However, after examining photographs from the site visit, I am not so certain.  A few wrought nails are visible in the pictures that I did not notice during my visit. 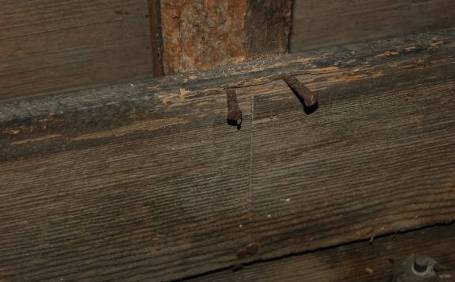 Cut nails used to fasten weatherboards in the lower section of the gambrel roof framing (above the plate). 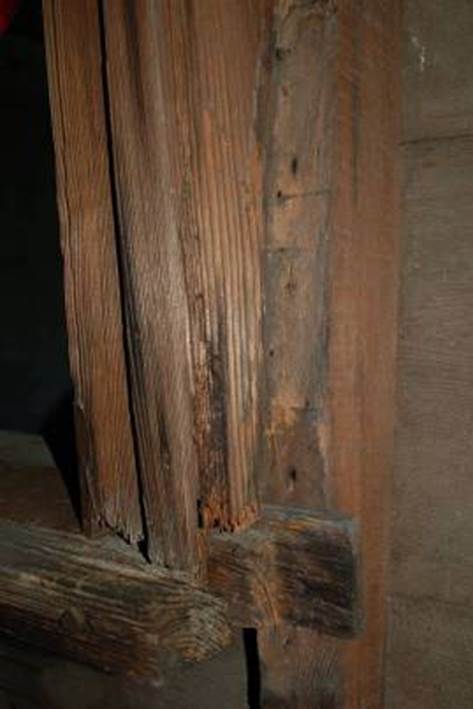 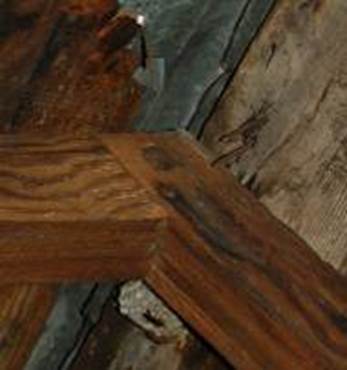 Perhaps the most interesting feature on the 2nd floor is the reasonably intact shed dormer window.  Few period dormer windows have survived in this condition.  The late 19th century roof of the one-story wing has encapsulated this significant feature. 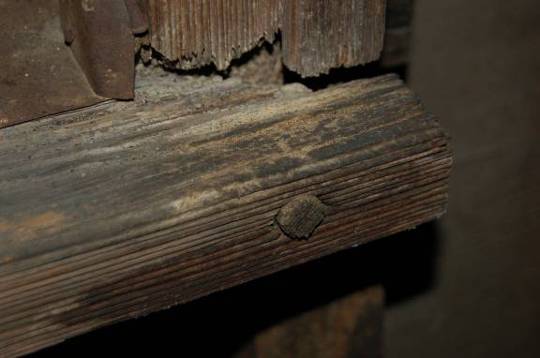 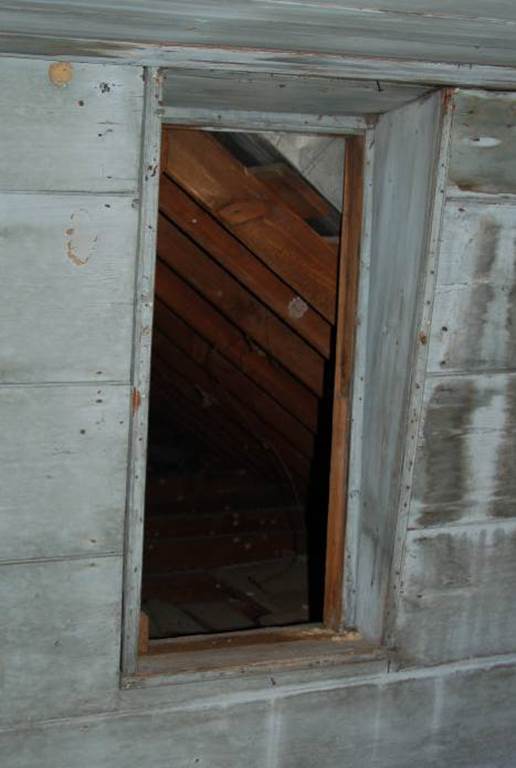 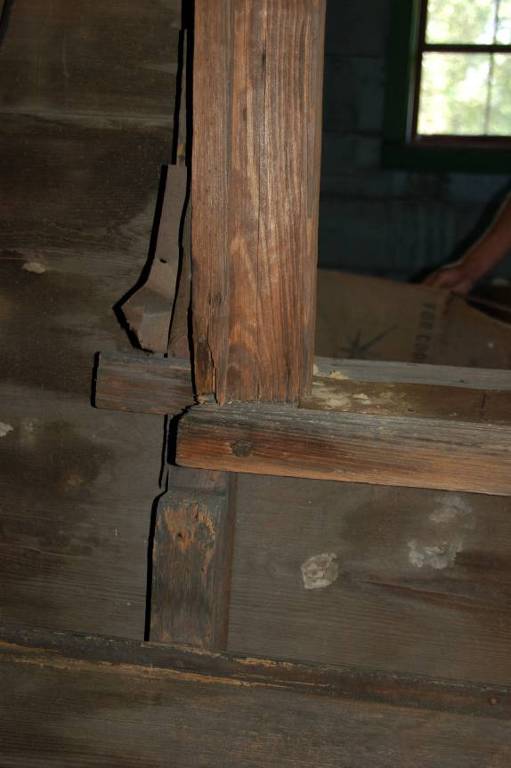 The beaded sheathing on the 2nd floor (except the ceiling boards) exhibits a finer bead than the heavier one on the 1st-floor sheathing. 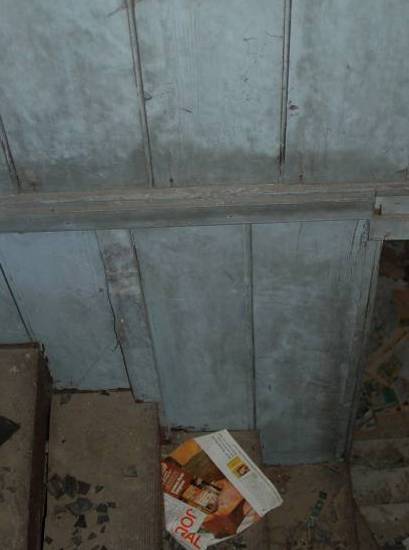 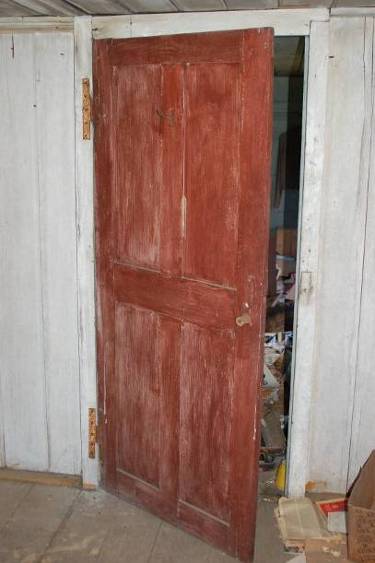 The rear (south side) shed rooms appear to date to the early 19th century.  The framing and attachment to the earlier portion of the house was well executed.  The southeast room contained its own fireplace. 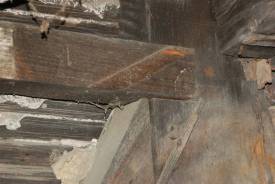 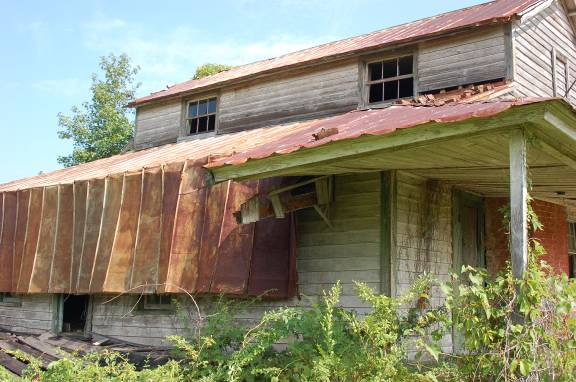